About a year ago, I wrote about how racism is still a relevant issue in recognition of Dr. Martin Luther King Day. Never in a million years did I think that within the year, that there would be consistent protesting in places like New York and Missouri with a march scheduled next week in Washington D.C. that revives memories of the 1960’s.
In some ways, one could believe that these protests are completely spontaneous, that these protesters don’t have anything better to do but take to the streets. Protests and social movements don’t just happen, there is always a history of frustration and then, a motivating tipping point. In this case, Eric Garner’s grand jury ruling was that tipping point. While the debates have focused on institutional racism and the corrupt legal system, I firmly believe that what’s being addressed here is not an effort to right past wrongs, but a need to see each other as human beings instead of the agenda we seem to represent.
For example, I’m afraid of police officers. I know it’s silly, but on the rare occasions I’ve had to interact with one in the States, my hands get all sweaty, I can’t look them in the eye and I am just waiting for things to get out of control. When I first arrived in Haiti, I had similar feelings, but they usually inspired a panic mode reaction. Influenced by the horror stories of police officers conducting check points that led to kidnappings, I often avoided police officers at all costs. But, I eventually had to go through a checkpoint and when I did I contemplated the following actions:
1) Speed past them before they knew what happened.
2) Let the car roll slowly, jump out of it and run to the                       nearest house.
3) Cry and pray that they’d leave me alone.
4) Just go with the flow and see where things would go.
As the first three would only make a potentially non-threatening situation worse, I opted for #4. After the cop checked my papers, he smiled and I was on my merry way, still in my car, still with my wallet, and in my opinion, safe. Over time, I gained respect and didn’t fear the police officers but saw them as people doing their job to keep Haiti’s streets safe. Not to say that are always successful, but little by little they are changing their reputation.
Returning home, that fear has returned. With the ominous blue lights, the incredible variety of weaponry that police officers have on at all times, and the overall aggression associated with law enforcement. It just makes me wonder, how is it that one of the most dangerous islands has been able to build an approachable police force, and the “land of the free” now has a system of terror? These are just my observations, but what do you think? Is our system justified or are our police officers addressing a threat that’s not there?

Jury duty. That dreaded piece of mail that induces anxiety and panic among every American citizen. Such feelings are probably due the unplanned disruption in the rhythm of life to potentially determine the fate of another human being. What if you get sucked into a 5 day murder trial? The possibility is unsettling.

However, when I was first selected, I was actually excited. I could finally see a trial in real life! Right off the bat, I was selected for a cocaine possession case. The defendant was arrested in that part of town where you double check that your doors are locked, and you hit the gas a little harder than you should. Although the police didn’t find the cocaine on his person, it was found nearby on the side of the road after he ran from the cops. We found him guilty and sent him right back to the jail that he had just left for other drug related charges. As time has gone on, I’ve often wondered what would have happened if he was white, if he had a better lawyer, if he was actually innocent. I think about him even more during these media storms: Trayvon Martin, Michael Brown, and the news stories of thousands of young men who die every year by gunfire, accidental or otherwise.

While the media fixates on fanning the flames of the racism and police brutality, how are we as American citizens ultimately affected by violent protests in part of the country that many of us have never visited? What our society often forgets, or chooses to ignore, is that there are systems in place that keep groups of citizens in certain areas and the only way to get out is by luck or remarkable determination. As evidenced by the seemingly over the top reaction to a petty thief’s shooting death. Protests and violence never just happen, they are the result of years of pent up frustration with injustice. For example, the Occupy Wall Street protests were a response to years of abuse by the banking system that sent our once thriving country into a recession that we are still recovering from.

Now that the molotov cocktails have been put away and a civil rights lawsuit is being filed, will the fiery conversations and artistic performances come to an end? Will we continue to ignore the injustices our system encourages? Or have we gained a collective understanding that there is something very wrong with our system and we have the power to address it?

“Our lives begin to end when we become silent about things that matter.” – Dr. Martin Luther King Jr.

January 20th for many in the States is a day of sleeping in, catching that movie on the “must see list,” and spending about 30 minutes thinking of the momentous impact of the life Dr. Martin Luther King Jr. Although this is a testament to how far the U.S. has come from the painful pre-Civil Rights Movement, it also illustrates how well the mainstream has been able to downplay the conversation about race in the States and making it seem that we have become a “post-racial” society; especially when it comes to discussing the Millennial generation.

With the continuing existence of “yolo” culture, living a life of excess is not only presented as desirable, but attainable. With an 11.1% unemployment rate of 20-24 year olds, recent college grads are left in this drastic gap between the new American dream and reality. Most T.V. shows, movies, and music focus exclusively on the experience of the upper to upper middle class white demographic (a la Real Housewives or the Kardashians) or objectify the honest struggles of lower middle to lower class Americans (a la Teen Mom). With such an overload of superficial mainstream media, where is the space for showing a bit of the honest American experience, peppered with some people who are the new face of the United States?

By masking the reality of the life of the minority in the United States, we are burying the legacy of Dr. Martin Luther King Jr. In reality, he was just a member of a thousand person, decades long movement. However, his ability to move all kinds people to action created the catalyst the movement needed to end segregation and ultimately move the United States to a more equal society.

But what does this have to do with today’s conversation about race? Today, prejudice has evolved from violent crimes to more subtle exclusions from jobs, social gatherings, and justice. Just look to the reaction towards the recent verdict of the Trayvon Martin case to understand how deep are the wounds of modern racism in the United States. But much like every other major news story, it has faded away something that would surely disappoint Dr. King.

What is encouraging is the openness in which the Millennial generation approaches the discussion of race and diversity in the United States. Even though it doesn’t immediately change policy, talking about what it means to be a minority has the potential to change a mind at a time. Better representation in the media is slowly providing stronger role models to help frame the aspirations of younger generations. Change is painfully slow and requires constant attention or else we risk repeating our history. 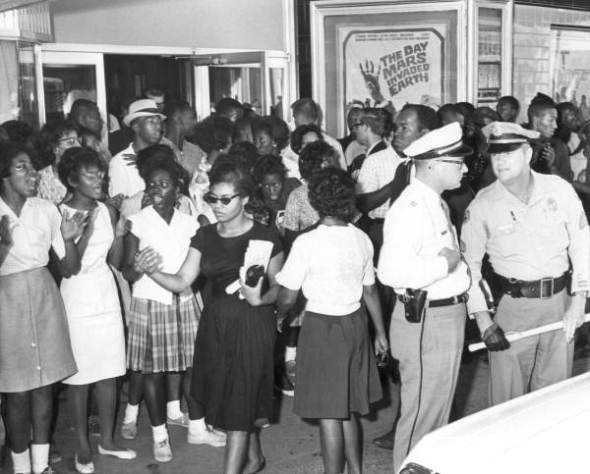 Tallahassee, Florida 1963 – a demonstration outside a segregated theater.